This version mismatch until lately this has not been an issues, but the latest version of the ADML has a line missing that does not working with older versions of the SearchOCR.ADMX (see below). 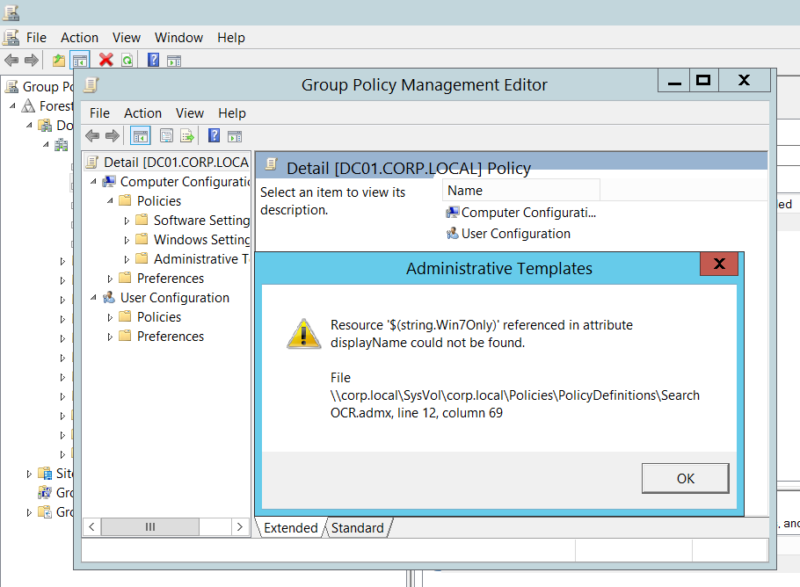 I can confirm with my testing that this is a problem if you still have a copy of the SearchOCR.ADMX file that is as old or older that Windows 10 1503.

So where does this SearchOCR.ADMX file come from if it does not come with Windows out of the box?  The answer is that it’s installed if you have the “Windows TIFF Ifilter” component installed. This then adds the SearchOCR.ADMX file to the local “C:\Windows\PolicyDefinitions” folder.

If you then at some stage copied the “PolicyDefinitions” folder from a computer with the “Windows TIFF IFilter” installed then you will have the “SearchOCR.ADMX” file in your central store. But as the ADMX/ADML policy pack or new version of Windows does not have this ADMX included by default when you overwrite the store this SearchOCR.ADMX file is not updated.

So to fix this problem there are a number of choices:

then add the line given below between them:

Note: I don’t recommend this method as hand editing a file even as benign as an ADML file can have issues. To fix the problem properly you also have to change it for all language versions would take a lot of effort.

So it’s a simple enough issue, just remove or replace the relevant “SearchOCR.ADMX” file and the problem will be fixed.